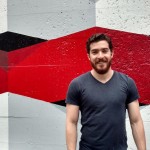 Since I just wanted to fetch geolocalized tweets, I checked for the existance of the coordinates entity in the Tweet object and only save the tweets with geolocation data (lat/long). After running the script for a few days I have around of ~50,000 tweets to play with.

Where were the tweets located?

The first that I wanted to do with the data was to see what was the origin of the tweets during that period. I decided to use a heatmap on top of a geographical map of the city. To do it, I used the development version of the Folium library, which implement mapping in Python on top of Leafleat.js and its plugins. The code used to generate the heatmap, once I've read the text file into a list named data is as simple as:

NOTE: Twitter coordinates are formated as geoJSON that is: longitude first, and then latitude. The code swaps them to add (lat, long) points to the map.

How does activity look?

So, there's a heatmap of the location of the tweets, but how can we represent the activity over the five days?

I thought that a calendar type chart, such as the one that shows the contributions activity on Github profiles, was an interesting way to represent the data visually. Grouping the tweets by day and hours in cells, and increasing the intensity of the cell depending on the total amount of tweets during that moment.

To achieve this, I decided to use matplotlib as the plotting library, insted of using a Javascript based library such as D3.js.

With some visual adjustments such as adding labels to the ticks, I've got the graphic I wanted.

NOTE: The lack of tweets during the morning of December 4, is due the absence of data in that period.

As expected, after midnight, when most people are sleeping, the amount of tweets is very close to zero in normal days (Dec 04, Dec 05, Dec 08). On the election day, the graph shows above "normal" activity, and we can see the exact moment when the results of the election were announced on national TV. Between 12 a.m and 2 a.m. of Dec. 07 the amount of tweets in Caracas duplicated.

This little project was used to research and learn the basics of the tooling available to represent data visually (graphs, charts, maps, etc.) some of the tools researched were:

You can check the Python wiki for a comprehensive list of libraries and resources for plotting data.